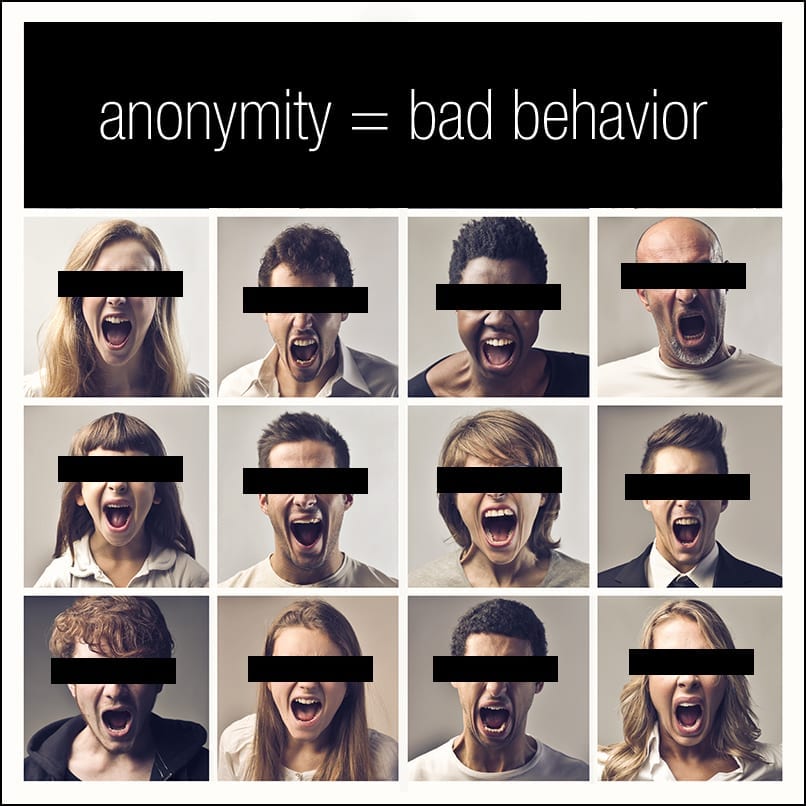 On the Internet, people will often say things they would never say to a person directly. The web provides a false sense of security, allowing people to feel as though they can say anything with no repercussions.

According to the American Academy of Pediatrics, cyberbullying is the top online risks for teenagers, but adolescents aren’t the only age group impacted by online harassment. Anyone who has ever frequented a social media site or online forum has likely seen someone posting hostile comments toward others. Often these comments are posted under screen names that hide the true identity of the poster.

The ability to remain anonymous has a direct impact on users’ online behavior. In fact, the phenomenon is so prevalent, it has been coined the Online Disinhibition Effect. According to a study by Rider University’s Department of Psychology, the anonymity provided by cyberspace allows people to do and say things they would never do otherwise. This frankness can be useful in some instances, but it can also lead to psychological damage, especially in its younger victims who aren’t yet able to recognize the insecurities behind these behaviors.

Rider University’s John Suler expounded on the Online Disinhibition Effect in a 2004 article in the journal CyberPsychology and Behavior. In the article, Suler stated that the effect is caused by a variety of factors, including anonymity and the feeling that one is invisible as he or she moves from one website to another. Suler also described how the imagination plays into online interactions, allowing people to disassociate from reality and become a part of the online worlds they inhabit.

Ideally, everyone would understand that to get away from cyberbullies, they need only log off and focus on real-life friends and family. Unfortunately, the effects of cyberbullying linger long after a person has logged off, leading to reduced self-esteem and causing stress that can wear on one’s physical health, as well. Some cases of cyberbullying have even led to depression and suicide.

Tougher cyberbullying laws help reduce instances, but unfortunately, those laws are usually enacted too late. Websites must first remove the layer of anonymity that allows users to engage in “trolling” behavior—moving from one site to another with the sole purpose of causing disharmony. Once users lose the protection of anonymity, chances are they’ll begin behaving as they would in real life.

Trulioo’s suite of products removes anonymity to protect online websites from inappropriate and damaging activity while at the same time taking steps for protecting consumer privacy.